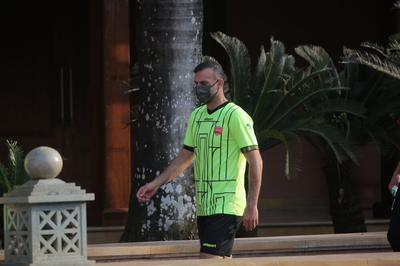 Studies show that no decision has been made yet on the continuation of cooperation between Seyed Jalal Hosseini and Persepolis.

According to ISNA, after the end of the 21st league, there was a lot of talk about the future of Seyed Jalal Hosseini’s cooperation with Persepolis, and it was said that he would probably join Malvan to say goodbye to football at the club where he once started playing football.
Meanwhile, the captain of Persepolis officially announced in an interview that he does not intend to say goodbye and wants to play in the Green Rectangle for the time being.
Now the future of Seyed Jalal Hosseini, whose contract with Persepolis has ended, is in a haze of ambiguity. He has expressed his interest in continuing to play for Persepolis, but it seems that Yahya Golmohammadi has not shown any desire to extend the contract of last season’s Persepolis captain.
Now we have to wait and see what Yahya Golmohammadi’s decision will be as the team’s head coach. If it was decided to stay, Hosseini would probably support him, and if Golmohammadi decides that Seyed Jalal Hosseini will not be a Persepolis player next season, despite Hosseini’s popularity and influence in recent years, fans are expected to support his coach’s decision. So as not to damage the team’s movement by creating margins and controversy.
Seyed Jalal Hosseini, who wore the Persepolis jersey for two seasons in the early 1990s and then went to Qatar and returned to Persepolis after a year at Naft Tehran, is now the Reds’ favorite captain, with the team for five consecutive seasons. Has won the Premier League. Maybe that’s why he is so popular among the fans, and this popularity has raised doubts about his departure from Persepolis.
There are many foreign examples about the situation of Seyed Jalal Hosseini and Persepolis. Buffon, Raولl, Casillas, Giorgio Chiellini, Vincent Kompany, Iniesta, Xavi and all of them were legends and captains of the team who were especially popular among the fans but there was never any sanctification for these stars and after the club did not want to extend their contract. , Separated without margin.
ISNA correspondent’s investigations show that Yahya Golmohammadi has not yet made a decision about Seyed Jalal Hosseini, and therefore it is not possible to speak about him definitively at this time.
End of message

We can become a finalist in Konya – UE News

Yahya has the right to complain/ tell Persepolis not to participate in the Premier League! — UE News