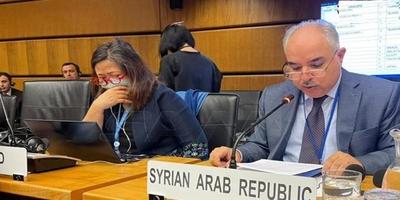 According to IRNA from the official Syrian news agency; Sana Hassan Khazour, in a statement he spoke at the meeting of the International Atomic Energy Agency’s Board of Governors, welcomed the Joint Action Community (JCPOA) program; He added: The unilateral withdrawal of the United States from the JCPOA without justification is a clear violation of Resolution 2231 of 2015, and the causes of the current events are the same.
Bilateral dialogue between Iran and the Agency is the only solution to solve the remaining issues.

In another part of his speech, the permanent representative of Syria in international organizations in Geneva asked the international community to make a clear decision and take practical and serious action so that Israel is required to join the nuclear non-proliferation treaty.
Regarding Article 12 of the International Atomic Energy Agency safeguards implementation in the Middle East region, he said: Syria believes that now is the time for the international community to stand against this policy, to ignore Israel’s dangerous actions, and make a clear decision. and take a practical and serious step so that Tel Aviv commits to joining the Nuclear Non-Proliferation Treaty and all its nuclear facilities are inspected by the Agency without any restrictions or conditions.
Khazour added: Despite the approval of this resolution in 1995 and despite all the practical initiatives that have been proposed to realize this goal, no practical step has been taken to create a zone free of nuclear weapons and other weapons of mass destruction in the Middle East, which is the reason. This is a challenge to the international community by Israel, and this regime, in the absolute shadow of its allies, refuses to join the treaty on the prohibition of the proliferation of chemical weapons. Y and Tama
He pointed out: Israel’s escape from joining this treaty is a clear sign that the regime does not value the international and regional will to rid the Middle East of all types of weapons of mass destruction.
The representative of Syria in Geneva discussed the dual approach of the United States and its unlimited support for the Zionist regime and said: America, which is a nuclear country, pays special attention to the issues related to the non-proliferation of weapons of mass destruction, but when the issue of Israel and its nuclear arsenal and When it comes to its chemistry, this attention fades and gives way to justifications and excuses for Israel’s possession of nuclear weapons.
Khazour said: Israel’s hostile behavior in the region and the survival of this regime and the possession of nuclear power outside the framework of the Non-Proliferation Treaty indicate a very big danger against the non-proliferation system, so that Israel has abused the conditions in the region and continuously caused a lot of damage. It affects the military and civilians.
The representative of Syria in Geneva continued: Israel does not have the authority to talk about the non-compliance of other countries to this treaty due to not joining the nuclear non-proliferation treaty.
Regarding the secret nuclear activities of the Zionist regime, he also said that since decades ago, Israel has expanded its nuclear military power secretly and without any supervision by international organizations, and some western countries have also equipped this regime.
In the end, the representative of Syria in Geneva stated that some members of the agency, and in their introduction, the United States, have contradictory positions on the issue of non-proliferation of weapons of mass destruction, so that they have closed their eyes to Israel’s nuclear power.