It seems that Saeed Maarouf will play in Fenerbahce’s jersey number 4 in the upcoming season. 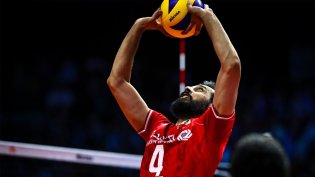 According to “Varzesh Seh”, the former passer of the Iranian national volleyball team was added to the Turkish Fenerbahce team after a break in the middle of last season and was able to leave a good show in this team. After that and with the end of the season, Maruf gave the green light to extend the contract.

Fenerbahçe, who advanced to the semi-finals with their Iranian passer, lost against Zareh Bank in this stage, while a few weeks before, they had managed to defeat this team in the preliminary stage with their famous brilliance.

Finally, the Turkish club officially announced a few weeks ago that it has extended the contract of its Iranian passer; Therefore, Saeed Marouf will continue his work in European volleyball and Turkish Fenerbahçe club for one more season. Fenerbahçe has been very active in transfers and this club has sent a contender team for the upcoming season.

Last season, Saeed Marouf was wearing Fenerbahçe’s shirt number 18, however, it seems that he will wear his favorite number in the upcoming season. Based on this, it has been observed that Marou is wearing the number 4 shirt in Fenerbahce’s pre-season matches, and it seems that we will witness this happening with the official start of the season.

Widespread domestic and international reactions to Mehsa Amini’s death; The culprits should be introduced and tried

In the Russian war over Ukraine, China and India appeared as financiers.

The Lebanese minister in response to Nasrallah’s proposal; We welcome donations from friendly countries