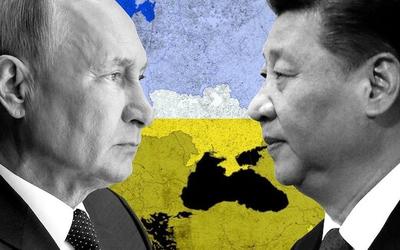 Abolfazl Khodaei: Russian President Vladimir Putin, during his trip to Samarkand to participate in the Shanghai Cooperation Organization summit on Friday, acknowledged the questions and concerns of his Chinese counterpart Xi Jinping regarding the Ukraine crisis, and appreciated his balanced position regarding this military conflict. He praised In this meeting, Putin mentioned China’s concerns and indicated that Moscow understands them and will answer China’s questions in detail. Although the Ukraine war was not mentioned in this meeting and Beijing, along with Moscow, refused to condemn the Russian attack, it is obvious that Beijing is extremely worried about the negative consequences of the Ukraine crisis on the world economy.
Meanwhile, the CNBC news channel quoted a political analyst and wrote: China has a superior position in relations with Russia, and President Xi Jinping is no longer ready for Moscow to act as he wants.
Matthew Sussex, a professor at Australia’s Griffith University, added: “It is an unequal partnership, and China is in a higher position in the relationship.” He considered the reason for it to be the fact that Russia needs China more.
These statements were made after the Chinese leader met with Russian President Vladimir Putin in Uzbekistan on the sidelines of the Shanghai Cooperation Organization in Samarkand. It was the first face-to-face meeting between the two leaders since Russia launched a war against neighboring Ukraine in February.

Read more:
Putin needs China more than ever
Putin appreciated China’s balanced position towards Ukraine
Putin in a meeting with the President of China: We condemn the American provocations in Taiwan

According to the report of the Chinese state media, Xinhua, in this meeting, Xi expressed that Beijing is ready to cooperate with Russia so that they can support each other’s important interests. But the professor at Australia’s Griffith University pointed out that the China-Russia partnership may not necessarily be on equal terms.
While China buys cheap oil from Russia, it has always denied selling any weapons to Moscow. According to this political analyst, this issue may express China’s real concerns and annoyances towards Russia’s management or behavior in the war against Ukraine.
However, Xiao Pu, professor of political science at the University of Nevada, believes that the strategic partnership between China and Russia will continue
The alliance is such that both powers can counter “Western hegemony,” a term used to describe Western dominance — politically, socially or economically — in the global community, Xiao Po added.
This Nevada University professor stated: China needs some kind of strategic partnership with Russia to counter Western hegemony, so China and Russia will continue to trade to maintain some kind of normal economic relations.

Symbolic support
Last month, Russia and China held a week-long joint military exercise in the Sea of ​​Japan with forces from other countries such as India, Laos and Mongolia. Both countries have held joint exercises in recent years, including in the Russian Far East.
However, Poe noted that the relationship has its limits.
This political science analyst added: China will not provide any military support to Russia, so I think China has its own reservations about Russia’s war. This partnership between Russia and China is not a form of military alliance. It is more of a token support. At the last face-to-face meeting between Chinese and Russian leaders in February, Xi and Putin signed an “unrestricted” partnership. They pledged diplomatic and political support to each other and agreed not to have any prohibited areas in cooperation.
Similarly, Sussex, a professor at Australia’s Griffith University, pointed to the limitations that Beijing may have, as seen in China’s reluctance to provide arms to Russia.
This Australian analyst claimed that China will probably remain on the sidelines in the future, but still, this issue will cause significant damage to the Russians in criminal matters related to the Ukraine war.
CNBC went on to quote this analyst as saying: “Unfettered” participation has limits, and increasingly, those limits are set by Beijing rather than Moscow. China is no longer ready for Russia to do as it pleases.

The message of the presence of Chinese and Russian leaders in Samarkand
Continuing his remarks, Xiao Po pointed out that the invasion of Ukraine has isolated Russia and said: Putin’s meeting with his Chinese counterpart in Samarkand can show that Russia has allies at the international level. Especially since he is meeting with some of the top leaders of the world in the capital of Uzbekistan.
Referring to China’s strong reservations about the Ukraine war, this professor of political science considered Xi Jinping’s visit to be an indication of his confidence before holding the Great Congress of the Communist Party of China and said that Xi’s goal is to tell his audience inside to say that he can handle international challenges and issues. However, the strategic partnership between Beijing and Moscow has become somewhat controversial inside China, which is significant.

My silence is not from satisfaction; We want respect and support – UA News

What is the procedure in Criminal Court 1? — UE News