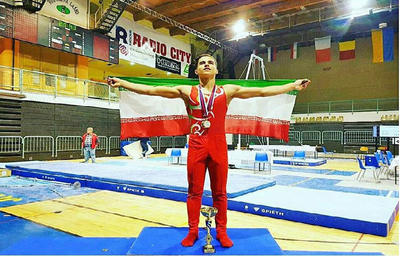 “Islamic countries competitions are one of the chances for us to win a team medal,” said the national gymnast.

In an interview with ISNA, Mohammad Reza Khosronejad, regarding the conditions of the national gymnastics team before being sent to the Asian Championships in Qatar, said: “We have been in the national team camp for about 45 days and we have reached 90% readiness.” We will be sent to Qatar in the coming days, and if God wills, we will reach the 100% peak by the day of the match. The team is in good condition. We hope to achieve good results in these competitions and win the quota of world champions Liverpool’s England. Hopefully, we will have a chance to become a finalist and win a medal in the single event.
“I will do my best in six ways to be among the top 16 to enter the world championships,” said the national gymnast. I also try to be a finalist in the parallel and ring means. We have to see what happens in the final. We hope it ends with a medal.
Khosronejad added: “The last event in which the national gymnastics team was present was the qualifying competition for the 2020 Tokyo Olympics, in which the national team participated in several competitions.” Now that the Asian Championship is set to take place in Qatar. There are 25 countries in this tournament, of which 17 countries will participate with a full team. The competitions are good and we hope that good results will be achieved.
Regarding the level of Iranian gymnastics in Asia and the distance from competitors, he said: “We have always been among the top seven or eight teams in Asia in Asia.” We were finalists in the previous Asian Games and became one of the top 8 teams in the team finals. Of course, we finished eighth in the final due to an injury. In these competitions, we try to get a good result for us. The top 5 teams directly win the World Champion quota. Thankfully, the team is in good condition. Kikha was only a few thousandths of a mile away from the Olympics. The situation of gymnastics in Iran has changed compared to before and has undergone a growing trend.
Khosronejad further stated about the games of Islamic countries: The competitions of Islamic countries are one of the chances for a team medal for us. In the singles, each athlete can reach the final in several ways. I work in two dedicated vehicles myself, but I also work in six vehicles, and it is possible that I will be able to win a medal separately.
He added: “In the Jakarta Asian Games, we left with 4 athletes and the National Olympic Committee did not agree to send another person.” We reached the team final in Jakarta, but the cruciate ligament of one of the national team players in our match before the team final was torn and our team was incomplete. If we were sent with 5 people, we could get a good result in those competitions as well.
“There are always shortcomings, but I thank the technical staff for following the same conditions in the camps,” said the national gymnast. All the equipment in Iran is at least 15 years old. We feel worn out in terms of hardware. We do not have a standard ground movement track in Iran. The equipment in the gym is very different from what we see in competitions, and these differences can be 100% in themselves an obstacle to achieving results.
End of message

Significant subsidence in the western part of Tehran; A “silent time bomb” threatens the capital

The Prime Minister of Israel considered the campaign of pressure against the revival of the JCPOA to have “positive consequences”.

Incredible moment in the fifth set of Iran-Poland – UA News