After indoor, beach and snow volleyball, this time the World Federation unveiled its new Superrise in 2022. 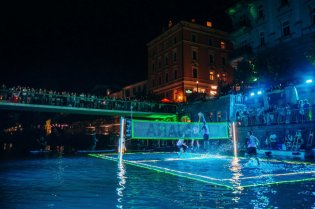 According to “Varzesh Se”, on the sidelines of the men’s world championships hosted by Slovenia and Poland and in order to excite the fans of this exciting field to watch these competitions, a new and attractive branch of water volleyball was unveiled.

This type of volleyball, which is also called “pool volleyball” or aquapolo, was popular among people in other parts of the world before, but it was not supported by the World Volleyball Federation.

Water volleyball is a team sport derived from volleyball, in which competitions are played in water, and it has gained attention in the United States, Europe, and South America, although a very similar sport called biribol has been developed in Brazil, which is actually water volleyball. is not.

Based on the existing laws among the countries that have experienced this fascinating sport so far, we can mention some of the rules considered for water volleyball.

This sport is mostly performed in swimming pools, and the dimensions of the ground used for it vary from 3 x 2 meters to 6 x 5 meters. The net that goes across the ground divides it into two equal halves. Different types of balls are used in this type of volleyball, but the most suitable is the beach ball, which has a diameter of at least 28 cm.

This sport, which has not yet found many fans, is played on both recreational and competitive levels. For recreational games, a team can have one to four players, but in competitions, each team must have four players.

Like volleyball, each game starts with a serve and ends with the referee’s whistle, although the game and scoring system works like table tennis, in such a way that the team that each team has the opportunity to serve twice and the team that reaches eleven points first , will win the set.

Depending on which country the game is played in, there will be variations in the size of the court, the number of players per team and the total number of sets played in a match.

Water volleyball has a long way to go to establish its position among enthusiasts and athletes, and the passage of time along with the addition of athletes in this field will help us to witness its growth and presence in world competitions and become known as before. Beach volleyball and snow volleyball traveled this difficult path to reach their current position. Beach volleyball is currently one of the most popular sports in the Summer Olympics, and snow volleyball is also trying to participate in the 2026 Winter Olympics hosted by Italy.

The threat to De Gea’s position in United; Buying a goalkeeper from Germany — UE News