Former England football star David Beckham attended the Queen’s funeral and waited in line for twelve hours to see her body in the coffin. 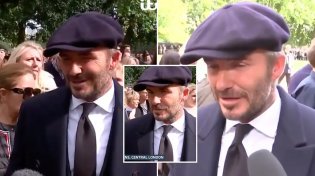 According to “Varzesh Se”, while thousands of English people lined up to see the queen for the last time, they came to say goodbye to her at the funeral ceremony of Queen Elizabeth. David Beckham He was one of these thousands. Interestingly, Beckham agreed to wait in line for twelve hours to participate in this event.

In an interview with Sky, Beckham said that he had been in line since 2 am on Friday and most of the people who were near him had not recognized the former football star of their country until this afternoon, which made it easier for Beckham.

But when the fans notice the presence of David Beckham by their side, the market of taking selfies with him heats up. After a while, a significant crowd forms at Beckham’s point of presence, to the point where the queue of participants in the Queen’s ceremony stops at that point and does not move forward.

Beckham said in this interview: “It was a difficult day. But hearing the stories and memories of those who were standing in line was valuable for me. Receiving the badge from the Queen was the most special thing that has ever happened to me. I went to the palace with my grandparents. I will never forget.”

David Beckham, who played 115 games for the England national team, was awarded the Order of Merit by Queen Elizabeth in 2003.

The agreement with Iran will not remain indefinite! – UE News

Preserving the music of the Sephardic Jews of Morocco – UA News