Former Tractor and Persepolis attacker was sentenced to prison for harassing his wife. 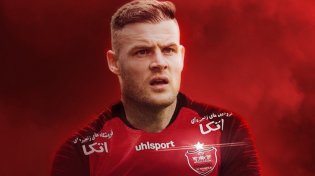 According to “Varzeh Se”, the 34-year-old Irish attacker, who was sentenced to four years of no contact with his ex-wife, previously admitted that he violated the sentence and sent harassing messages and e-mails to his wife.

The same issue led to the formation of a new court for this former striker working in the Iranian League to examine his case, but it was canceled last month due to Stokes being infected with Corona, and now an Irish website has announced that the court will be held.

According to thejournal of Ireland, Stokes did not appear in this court again, but in his absence, the court ordered the arrest of the former Sunderland striker so that the story of this famous footballer took a strange turn.

The interesting thing is that the history of the harassment of this player’s wife is related to a few months before his transfer to Persepolis, although Stokes had hidden his actions during this period.

However, soon Stokes will go to the detention center and probably the football period of this prolific striker will also end with the same incident.

Let my body be at Wimbledon too – UA News